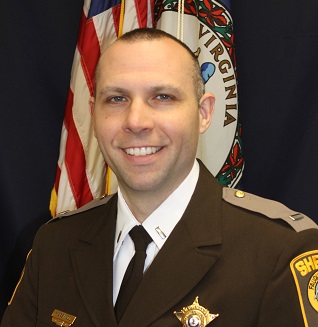 Lieutenant Andrew (Andy) Marshall heard his calling to law enforcement at a young age.  At 14 years old he joined the newly created Law Enforcement Explorer Post sponsored by the Fauquier County Sheriff’s Office.  At the age of 21, Andy graduated from the Explorer program and became an Auxiliary Deputy with the Sheriff’s Office.

Upon graduating from George Mason University with a B.S. in Administration of Justice, Andy began his 19 year career with the Fauquier County Sheriff’s Office.  He was initially assigned to the Adult Detention Center, but upon graduating from the Northern Virginia Criminal Justice Academy, he was assigned to the Patrol Division where he still serves today.  Andy has worked up through the ranks, rising to the position of First Sergeant to Lieutenant.  Lieutenant Marshall is currently serving as the Assistant Commander of the Patrol Division.  He is also a graduate of the 267th session of the FBI National Academy.